Thaddaeus, the tenth, is the disciple of praise, a quality in which the undisciplined man is woefully lacking. When this quality of praise and thanksgiving is awake within man, he walks with the words, “Thank you, Father,” ever on his lips. He knows that his thanks for things not seen opens the windows of heaven and permits gifts beyond his capacity to receive to be poured upon him.

The man who is not thankful for things received is not likely to be the recipient of many gifts from the same source. Until this quality of the mind is disciplined, man will not see the desert blossom as the rose. Praise and thanksgiving are to the invisible gifts of God (one’s desires) what rain and sun are to the unseen seeds in the bosom of the earth.

The twelfth and last of the disciplined qualities of the mind is called Judas. When this quality is awake man knows that he must die to that which he is before he can become that which he desires to be. So it is said of this disciple that he committed suicide,which is the mystic’s way of telling the initiated that Judas ; the disciplined aspect of detachment. This one knows that his I AM or consciousness is his savior, so he lets all other saviors go. This quality when disciplined gives one the strength to let go.

The man who has called Judas into being has learned how to take his attention away from problems or limitations and to place it upon that which is the solution or savior. “Except ye be born again you cannot in anywise enter the Kingdom of Heaven.” “No greater love hath man than this, that he give his life for a friend.” When man realizes that the quality desired, if realized, would save and befriend him, he willingly gives up his life (present conception of himself) for his friend by detaching his consciousness from that which he is conscious of being and assuming the consciousness of that which he desires to be.

Judas, the one whom the world in its ignorance has blackened, will when man awakes from his undisciplined state, be placed on high for God is love and no greater love has a man than this that he lay down his life for a friend. Until man lets go of that which he is now conscious of being, he will not become that which he desires to be; and Judas is the one who accomplishes this through suicide or detachment.

This little book is kind of a continuation of the author’s Pendulum book. There is also a DVD presentation available.

There are tons of books available on the topic of Consciousness and Awareness. But this one is simply a class of its own, because of the humor, simplicity and graphics. If you fast forward to the end conclusion, Relax and have fun, because there is no end to this evolution.

“Consider it pure joy, my brothers and sisters, a whenever you face trials of many kinds, because you know that the testing of your faith produces perseverance. Let perseverance finish its work so that you may be mature and complete, not lacking anything. If any of you lacks wisdom, you should ask God, who gives generously to all without finding fault, and it will be given to you. But when you ask, you must believe and not doubt, because the one who doubts is like a wave of the sea, blown and tossed by the wind. That person should not expect to receive anything from the Lord. Such a person is double-minded and unstable in all they do.” 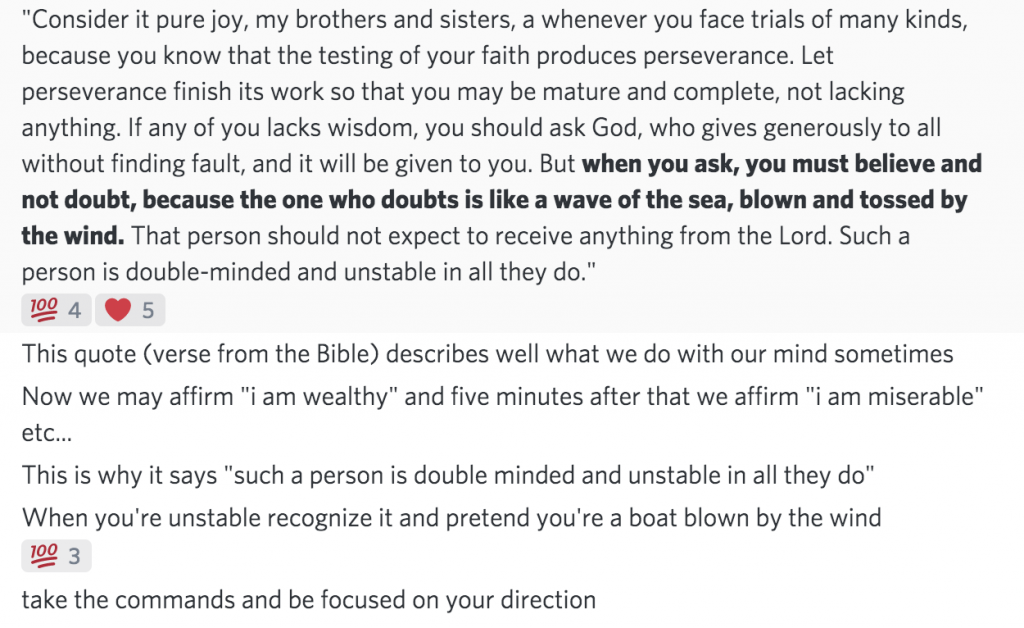 Self-conception was something I didn’t want to hear about. Why? Cause my victim mentality wanted to stay alive. I would read AIM’s posts and think “cool stuff but I’m going to listen to other people who have victim mindsets cause they know where I’m coming from” Lol.

The moment I accepted I had a victim mindset, I made myself aware I had the power to change it. And yes it was just that easy. I didn’t have to sit down listen to 30 hours of self-love meditations, I just had to acknowledge I have this, I no longer want it, then stay persisting new beliefs that challenged my victim mindset. I starved it to death.

Being aware of who I wanted to be (the me who has it all) claiming I am it right RIGHT NOW was everything I needed to do. It was that simple. The reason it took time was cause I didn’t want to let go of the old story even though I really wanted to. (I’m sure that makes sense lol)

The ego/old self trick that everyone commonly falls for is the trick of “waiting”. Waiting to feel better, waiting for people or circumstances to change, waiting for yourself to change… hello! It’s you! Who are you waiting on?

When it’s not feeling right it’s because you conjured up a state/feeling and you’re now pretending that this came to you from the outside and you have to wait for it to pass… waiting for a better day or better moment. This is a game you’re playing with yourself but it’s the cause of all of your dissatisfaction.

When dissatisfaction is there, when an uncomfortable feeling is there, when lack or frustration is there… FEEL it without judgement or resistance and remember that it is only there because YOU summoned it, there is no second power pushing it on you. You can change your mind and it can dissolve in an instant, but if not then Just watch it as if you are watching a snowflake in the sun. It will dissolve in seconds or minutes in most cases. And now what?

Now you just demonstrated to yourself that you don’t have to get stuck in waiting mode – you can actively dissolve afflictive emotion or states through non-resistance and remembering the truth. Likewise you can summon the exact states you want. It’s not difficult, a single word like “success” or “love” can do the trick if you enter into it feelingly.

Great success story to illustrate the immediacy of this path!

See these are the type of posts and comments that get to me man. “It’s so hard.” “I can’t do this.”

Have you learned nothing? The FUNDAMENTAL of Neville’s teachings was that your concept of yourself is what manifests.

– Feeling Is The Secret

And what are you doing? Half-assing SATS sessions and positive thoughts here and there? All while affirming on Reddit that you can’t do it? Doesn’t work like that my g, as Neville said, a slight change of mood here and there isn’t what gets you results, a complete transformation does.

“Armed with a working knowledge of this law, you can build and maintain an ideal world.”

– Feeling Is The Secret

Literally. Once you fully understand how to work the law you realize that your imagination is your best friend.

In order to see results you have to completely persuade yourself that you are that which you want to be. And that is the only way. Understand that your desires won’t be handed to you. You have to persist in persuading yourself that you are that which you want to be. I linked Neville’s book “Feeling Is the Secret.” Twice. Read it. It’s not a very long book. It’s everything you need to know. If you have been reading this subreddit more than you’ve read Neville’s work then prepare to be enlightened. 99% of the posts on here are complete trash, and I mean it. 99%. After reading Neville’s work you realize how people on here have twisted their interpretation of the law over the years. Aside from reading Neville, I’ll leave you with this post to read. The only post aside from a few others that’s worth reading on this subreddit. Apply it. Don’t half-ass it. You can do it.

I’ve given you everything you need. Keep your head up and persist. Read more Neville. You can find all his books and lectures online for free. Your imagination is your best friend. And I just want to remind you, the only thing that can stop you is yourself.